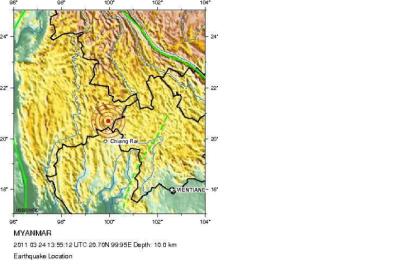 Two 7.0 magnitude earthquakes stuck Myanmar on March 24. Earthquakes struck a relatively rural section of the country that borders on Thailand, Laos, and China. But these back to back disasters, earlier in Japan and now in Myanmar, prompted Chinese government will launch a campaign to map the country's active fault lines.

Meanwhile, USGS has released map of the earthquake's intensity and map of the location of the quake. On the other hand, in China, according to Ran Yongkang, a senior research fellow with the Institute of Geology under the China Earthquake Administration (CEA), the earthquake faults detection work will be finished by 2020. Ran added that a separate and smaller-scale active fault detection campaign had started in China's major cities including Beijing and Shanghai in 2004.

Earlier, Gao Mengtan, with the CEA Institute of Geophysics, said the country is working on a new seismic zoning map, which marks regions in terms of their quake risk. The map will be finished this year. According to Gao, based on the new map, the government will release specific "counter-seismic" requirements for buildings and facilities across the country.