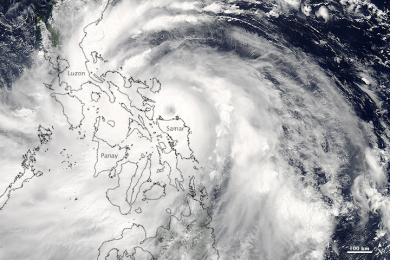 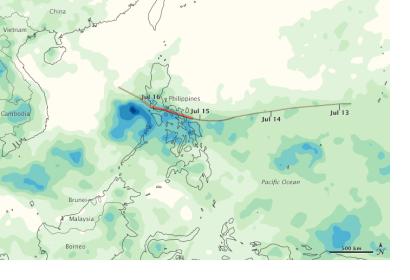 On 15 and 16 July 2014 Typhoon Rammasun swept across the southern Philippine islands of Luzon as a category 3 storm. The typhoon made landfall with 200 km dropping 200 millimeters of rain on Luzon, Samar, and Panay.  Official have attributed 20 deaths to Rammasun’s high winds blowing down trees and power lines but claim that the damage could have been worse. Applying lessons learned from Haiyan 8 months prior more than 400,000 people evacuated their homes in the storm’s path.

The Moderate Resolution Imaging Spectroradiometer (MODIS) on NASA’s Aqua satellite acquired an image of the storm at 1:00 p.m. local time on 15 July 2014, right before it made landfall in the Philippines. Additionally, the Tropical Rainfall Measuring Mission (TRMM) captured the heavy precipitation of more than 200 millimeters (8 inches) of rain on parts of Luzon, Samar, and Panay, Philippines.

As of 16 of July the typhoon was expected to regain strength as it crossed the warm waters of the South China Sea tracking toward China’s Hainan Island expecting to make landfall on Friday 18 July 2014 as a category 2-3 storm.