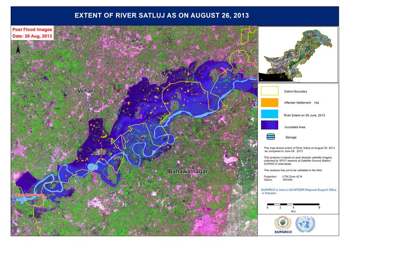 Pakistan is currently facing medium to high level flooding in all the major rivers of the country. The flooding is mainly due to heavy monsoon rains combined with hill torrents from North-Western mountain ranges and heavy inflow of water in Eastern Rivers. According to National Disaster Management Authority (NDMA), heavy monsoon rains starting at the beginning of August 2013 caused widespread losses and damages across the country. About 139 lives are lost and one million people are affected across Pakistan. The Rapid/Detailed damage assessment work carried out by the Regional Support Office has been appreciated by the federal and provincial government departments concerned. The Food and Agricultural Organisation of the United Nations (FAO) office in Pakistan is also being assisted by provisioning of statistics of inundated agriculture, damages to standing crops and livestock.