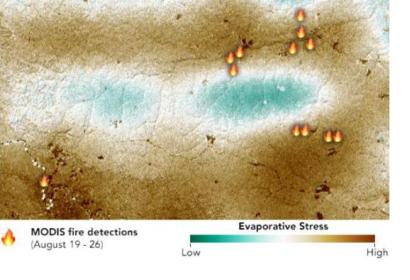 Major disasters such as droughts and wildfires are driven by the dryness of vegetation. To enhance the monitoring of plant water stress, NASA launched and installed a new sensor on the International Space Station. ECOSTRESS (ECOsystem Spaceborne Thermal Radiometer Experiment on Space Station) allows identifying loss of water in leaves- even before they show visible signs of trouble.

The image to the left shows a product derived from ECOSTRESS data, indicating that the forest fires during the 2019 Amazon dry season were concentrated in water-stressed areas, which are not visible on optical imagery. “To the naked eye, the fires appear randomly distributed throughout the forest,” said Josh Fisher, ECOSTRESS science lead at NASA’s Jet Propulsion Laboratory.

Plants regulate their temperature through so-called transpiration, which is the release of water through tiny pores on their leaves - a process similar to “sweating”. The temperature of the plant increases if there is not sufficient water available to mitigate the heat. Water also evaporates from the soil around the plant and affects the water availablity. The combined process is known as evapotranspiration. The evaporative stress of vegetation is reflected through the Earth’s surface temperature, which is being measured by the ECOSTRESS sensor. The ECOSTRESS radiometer consists of five spectral bands located in the thermal infrared domain of the electromagnetic spectrum. The sensor produces datasets with a spatial resolution of 30x30 m at a repetition rate of 1-7 days.

By measuring the evaporative stress, ECOSTRESS datasets have the potential to detect areas which are susceptible to wildfires or drought events and could support early-warning of drought-related disasters. This new opportunity is also reflected in one of the main research questions stated by the ECOSTRESS mission: “Can agricultural vulnerability be reduced through advanced monitoring of agricultural water consumptive use and improved drought estimation?”

The datasets are freely available on various platforms, such as AppEEARS, and might already be used to not only analyze plant health, but also volcanoes, urban heat or coastal systems. In order to learn how to process and interpret these datasets, NASA’s Applied Remote Sensing Training Program (ARSET) is delivering a webinar “New Sensor Highlight: ECOSTRESS” on 20 November 2019.