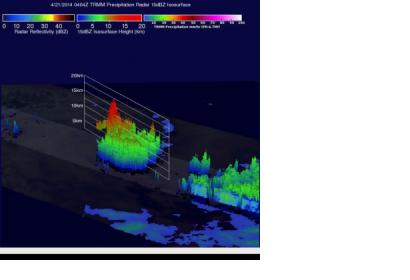 Tropical Cyclone Jack lost power yesterday, 22 April 2014, and is no longer on the scale of tropical cyclones. However, NASA’s TRMM satellite took one last look at the storm yesterday.

The TRMM satellite is co-managed by NASA and the Japan Aerospace Exploration Agency JAXA. The satellite mission flew twice over the storm and delivered data about rainfall and precipitation rates. The TRMM’s Microwave Imager and Precipitation Radar were used to create this image.

The data gathered by the mission was used to track the development of the storm and its movement. By 21 April 2014 the satellite data showed that the storm is likely to move to an area with cooler sea surface temperatures which will ultimately weaken it.