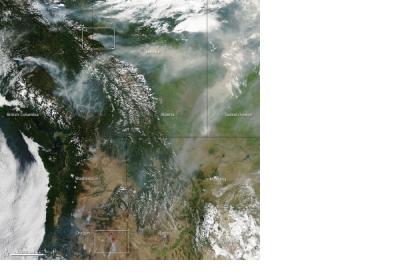 NASA reported: "According to the Canadian government, 102 uncontrolled fires were burning in British Columbia on July 17, and there were 13 more in Alberta. Across the border, 33 uncontrolled fires were active in Washington and Oregon." On the image to the left "the snow-capped peaks of the Canadian Rockies are visible in the center of the image. Large banks of white clouds hover over the Pacific Ocean, northern Alberta, and Wyoming. Winds pushed long plumes of smoke east toward Alberta and into Saskatchewan."