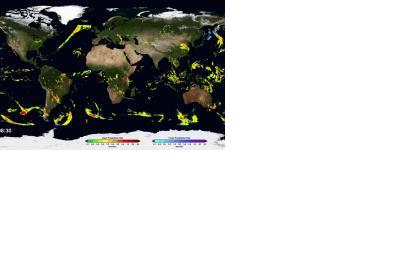 The GPM Core Observatory – launched one year ago on 27 February 2014, as a collaboration between NASA and the Japan Aerospace Exploration Agency – acts as the standard to unify precipitation measurements from a network of 12 satellites. The result is NASA's Integrated Multi-satellite Retrievals for GPM data product, called IMERG, which combines all of these data from 12 satellites into a single, seamless map.

The map covers more of the globe than any previous NASA precipitation data set and has repeat coverage every three hours, allowing scientists to see how rain and snow storms move around nearly the entire planet. As scientists work to understand all the elements of Earth’s climate and weather systems, and how they could change in the future, GPM provides a major step forward in providing the scientific community comprehensive and consistent measurements of precipitation.

"We get data requests from all over the world," said GPM Deputy Project Scientist George Huffman, who leads the IMERG team at Goddard. "People living in India are trying to understand the monsoon and what it means for the risk of landslides and flooding. People in Africa are working with famine relief programs that need rainfall data to forecast the growing season. Even here in the United States where we have a good weather radar network system, we need satellite data over the oceans to see what's coming."