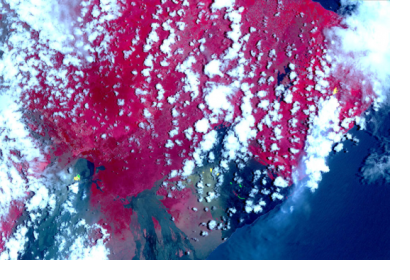 NASA satellites are closely monitoring Kilauea volcano in Hawaii, United States of America amid fears that the ongoing eruption could cause further evacuation of the local population.
On 30 April 2018, the floor of Kilauea’s crater began to collapse. Earthquakes followed, including one that measured magnitude 6.9, and lava was pushed into new underground areas that eventually broke through the ground in areas such as Leilani Estates. The fissures and high levels of sulphur dioxide gas prompted the authorities to order nearly 2,000 residents to evacuate Lanipuna Gardens and the neighbouring Leilani Estates, both located in the mostly rural district of Puna on Hawaii's Big Island.
Satellite images taken by NASA on 6 May 2018 show a number of gas- and lava-oozing fissures in the East Riff Zone of Kilauea volcano. Images taken from the Advanced Spaceborne Thermal Emission and Reflection Radiometer (ASTER) onboard NASA’s earth observation satellite, Terra, picked up these new fissures. In the image (above), the red areas are vegetation, and the black and gray areas are old lava flows. The yellow areas superimposed over the image show hot spots that were detected by ASTER’s thermal infrared bands. Another image released by NASA shows yellow and green streaks depicting sulphur dioxide gas, which can be dangerous to human health at high levels. The satellite also recorded images of the eruption plume of the volcano. Such satellite images are being utilised by civil authorities, scientists and the local population to understand where lava is flowing and where toxic gases are moving in order to take avoidance measures.
As of 10 May 2018, Kilauea has destroyed 36 structures including 26 homes since it began releasing lava from vents about 40 kilometres east of the summit crater. There are now 15 of the vents spread through Leilani Estates and neighbouring Lanipuna Gardens. In the coming weeks, the summit crater could eject ballistic blocks up to 2 metres in diameter to a distance of 1 kilometre or more according to the United States Geological Survey. The agency also said that residents of the Kīlauea summit area should learn about the hazards of ashfall, stay informed of the status of the volcano and area closures, and review family and business emergency plans.
Kilauea is the youngest and south-eastern-most volcano on the island of Hawaii. Eruptive activity along the East Rift Zone has been continuous since 1983. Kilauea is one of the world’s most active volcanoes.

In December 1999, NASA launched the Terra satellite as the flagship mission of its Earth Observing System. The Terra satellite carries five instruments that observe Earth's atmosphere, ocean, land, snow and ice, and energy budget. Taken together, these observations provide unique insight into how the Earth works and how it is changing. Observations via the Terra satellite reveal humanity's impact on the planet and provide crucial data about natural disasters like volcanoes and wildfires.
This article was contributed by Jack Kavanagh, UN Online Volunteer mobilized through www.onlinevolunteering.org.
NASA Satellite Images Show Fissures from Hawaii Volcano
Sun, 05/13/2018 - 12:24
Volcanic Eruption