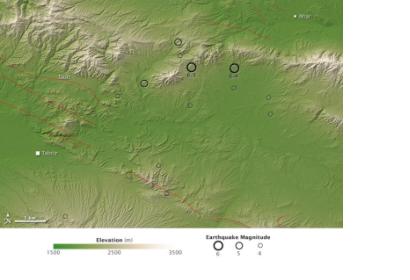 The two earthquakes were separated only by 11 minutes and 10 kilometers. The U.S. Geological Survey (USGS) explained that they occurred in the crust of the Eurasian Plate. In this region, the Arabian Plate moves around 26 millimeters per year northward with respect to the Eurasian Plate, but USGS stated that these earthquakes happened about 300 kilometers east of the plate boundary. Probably the events occurred due to an oblique strike-slip fault, where blocks of Earth slide past each other, but because of the location was so far from a plate boundary it is difficult to give accurate explanation.