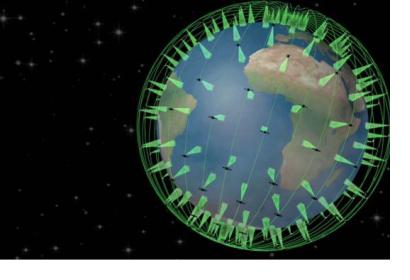 The NASA Jet Propulsion Laboratory, based in Pasadena, California is developing a new network of space-based sensors called FireSat in collaboration with the private company Quadra Pi R2E, which is based in San Francisco, California. The new sensors are designed to improve the detection of wildfires.  FireSat is expected to be launched by June 2018.
FireSat will consist of a network of more than 200 thermal infrared imaging sensors loaded in a network of satellites. The satellite network will contribute to identify wildfires around the world. Once completed, FireSat would provide the greatest coverage of wildfires from space.
Robert Staehle, lead designer of FireSat at the NASA Jet Propulsion Laboratory, indicated that "While many wildfires are reported by 9-1-1 calls soon after ignition, some are not, and delays in detection can lead to rapid escalation of a fire, and dramatic growth of the cost of suppression. The system we envision will work day and night for fires anywhere in the world."
Once operational, FireSat sensors would be able to identify wildfires from 35 up to 50 feet (10 to 15 meters) wide, nearly 15 minutes after they begin. Once a forest fire is identified by FireSat, emergency responders would be notified, thereby improving the capacity of fire fighters to suppress such a forest fire more quickly. In addition to fires, FireSat sensors will have the capacity to identify other dangerous events that produce high heat signals around the globe, such as explosions or oil spills.
Satellite Sensors Would Deliver Global Fire Coverage
Mon, 11/23/2015 - 16:24