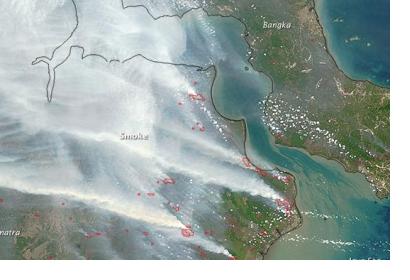 Since weeks Indonesia experiences severe forest fires in Sumatra and Kalimantan, Indonesia's half of Borneo island. Social Minister Khofifah Indar Parawansa officially confirmed the death of 19 people, as a cause of the effects of the fire haze. Due to heavy rainfall within the last days, the number of fire hot spots decreased from 1.578 to 291 on 28 October.

Pollution levels advanced from "unhealthy" to "moderate" in Riau province on Sumatra island. Overall, more than half a million Indonesians suffer from the effects of the haze. This year’s fires had been worsened by El Niño, which further caused severe dryness in Indonesia.

In the past, Indonesia had been impacted by several fires due to the common practice of "slash and burn agriculture", in which rainforest is burned to clear the ground for the growing of crops, like oil palm and acacia pulp, and the grazing of animals. Often fires smolder under the surface of Indonesia, continuing for a long time period. The storage of peat at the coast of Borneo and Sumatra exaggerates fires additionally.

Besides Indonesia, Sinagpore, Malaysia, southern Thailand and the southern Philippines had been as well affected by this year’s effects of haze.