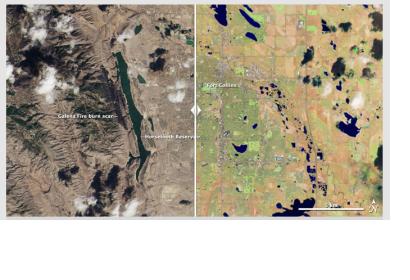 NASA and the Department of the Interior's U.S. Geological Survey (USGS) have released the first images from the Landsat Data Continuity Mission (LDCM) satellite, which was launched Feb. 11.

The natural-color images show the intersection of the United States Great Plains and the Front Range of the Rocky Mountains in Wyoming and Colorado. In the images, green coniferous forests in the mountains stretch down to the brown plains with Denver and other cities strung south to north.

"We are very excited about this first collection of simultaneous imagery," said Jim Irons, LDCM project scientist at NASA's Goddard Space Flight Center in Greenbelt, Md. "These images confirm we have two healthy, functioning sensors that survived the rigors of launch and insertion into Earth orbit."

After its checkout and commissioning phase is complete, LDCM will begin its normal operations in May. At that time, NASA will hand over control of the satellite to the USGS, which will operate it throughout its planned five-year mission life. The satellite will be renamed Landsat 8. USGS will process data from OLI and TIRS and add it to the Landsat Data Archive at the USGS Earth Resources Observation and Science Center, where it will be distributed for free via the Internet.

LDCM's first scene can be viewed on the NASA website.