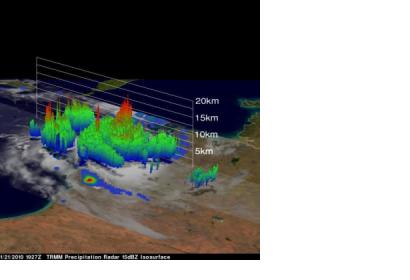 The operation of the Precipitation Radar (PR) on board the Tropical Rainfall Measuring Mission (TRMM) satellite was completed on 7 October 2014, as the Japan Aerospace Exploration Agency JAXA announced. TRMM is a joint enterprise between NASA and JAXA and is aimed to measure rainfall for extreme weather monitoring and climate research.

Rainfall observation by PR will be succeeded by the Dual-frequency Precipitation Radar on board the Global Precipitation Measurement Core Observatory, which was launched on 28 February 2014. JAXA specified: "Since the PR hardware is still in healthy condition, JAXA plans to conduct extra experimental operations of the PR during about 6 months while the spacecraft descending. The PR observation data around 350 km, which is original nominal altitude, will be distributed to public after verification. Also, NASA continues operations of the TRMM Microwave Imager while the spacecraft descending, since its operations do not depend on altitude."

Due to sudden pressure decreases on July 2014 and lack of fuel, NASA and JAXA agreed on starting the descent of the spacecraft from 402.5 km to the current 392.5 km. JAXA decided to conduct further operations during the six months of TRMM's descent and to distribute publicly the data gathered.