Japan to host World Conference on Disaster Risk Reduction in 2015 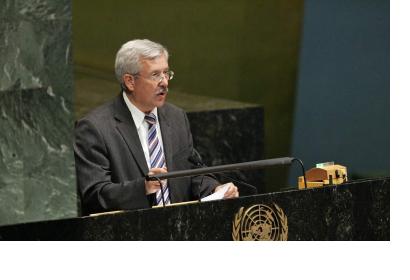 Japan will host the world conference slated to be held next year at which countries will adopt the successor to the current global blueprint for disaster risk reduction efforts,  as announced today at the Fourth Session of the Global Platform for Disaster Risk Reduction that wrapped up in Geneva.

Delegates at the event called for immediately starting work on developing targets and indicators to monitor the reduction of risk, ahead of next year’s conference, to be held in the Japanese city of Sendai. Martin Dahinden, Director-General of the Swiss Agency for Development and Cooperation and Chair of the Global Platform, said the three-day meeting confirmed that the process to develop a successor to the Hyogo Framework is well underway.“There is consensus that the new instrument should build on the HFA and introduce the necessary innovations to address the challenges of increasing risk over the next 20 to 30 years,” he stated.

The 10-year Hyogo Framework for Action (HFA) came out of the world conference held in Kobe, Hyogo, Japan, in 2005. It is the first plan to explain, describe and detail the work that is required from all different sectors and actors to reduce disaster losses. The HFA outlines five priorities for action, and offers guiding principles and practical means for achieving disaster resilience. Its goal is to substantially reduce disaster losses by 2015 by building the resilience of nations and communities to disasters.