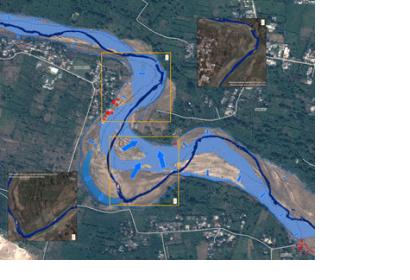 The International Charter: Space and Major Disasters was activated twice in the context of Hurricane Sandy - the largest Atlantic tropical storm system on record. UNITAR/UNOSAT on behalf of UNOCHA activated the mechanism on 29 October 2012 for Haiti. Hurricane Sandy tore through the Caribbean between 26-28 October, leaving a reported 51 dead in Haiti and another 15 missing. The country's housing and terrain are particularly vulnerable to flooding, and the refugee camps from the 2010 earthquake have also been affected by the storm. The southern part of Haiti was most affected by the storm, which includes the capital of Port-au-Prince and the 370,000 earthquake refugees in simple wood and tin shelters. More than 200,000 people have been left homeless following the storm, with some coastal houses swept out to sea. In the aftermath of the storm, 17,200 people have been placed in shelters.

USGS on behalf of Federal Emergency Management Agency (FEMA) activated the Charter subsequently for the States of New York and New Jersey, USA on 1 November 2012. Hurricane Sandy made landfall just south of Atlantic City, New Jersey, bringing winds up to 90 mph (150 kph), and pushing a massive storm surge onto beaches and shorelines. At least 50 deaths have been reported. Millions across the Eastern Seaboard have been without power for days, and even more are struggling with rising floodwater. Sandy continued northward, downgraded to a post-tropical cyclone.