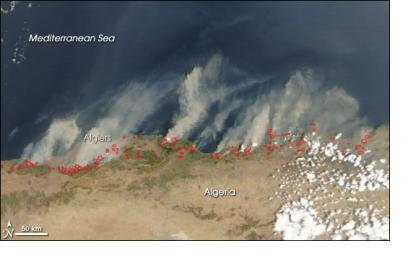 The International Charter: Space and Major Disasters was activated on 13 August 2012 to provide satellite imagery for the forest fires that have been ravaging the north of Algeria since June. They are a result of hotter than average summer heat waves that have been reported to reach as high as 50 degrees Celsius. Three people have been reported killed in the fires, two of which were a firefighter and forest worker attempting to put out a blaze. Over 100 fires were reportedly still in progress as of 8 August.

The Charter was activated by the Algerian Civil Protection Agency on behalf of the Algerian Space Agency, host of one of UN-SPIDER's Regional Support Offices.