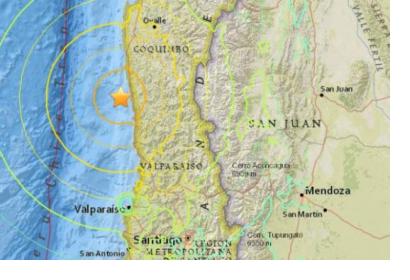 The International Charter: Space and Major Disasters has been triggered to provide satellite-based emergency maps in response to a powerful 8.3 magnitude earthquake in Chile and also caused a tsunami, which affected some parts of the coast. The mechanism was activated on 17 September 2015, at 09:37:02 (UTC+03:00) by ONEMI.

The International Charter reported: “The epicenter of the earthquake was just off the coast of the Coquimbo Province and lasted for approximately three minutes. Dozens of aftershocks followed, as well as a tsunami which brought waves recorded as high as 4.7m to the coastal areas closest to the epicenter. It is reportedly the most powerful earthquake worldwide this year”.

Chile is a well-prepared country for such incidents, in terms of infrastructure and also emergency response. Even though, this event was located on the 6th place on this country’s most powerful earthquakes, the damages were minimal. This time it lasted around three minutes.

Hundreds of homes were affected, and 90,000 left without power and many lost access to drinking water. Chileans across the country are rebuilding their houses and business after the quake.