International Charter activated in Australia due to a tropical Cyclone 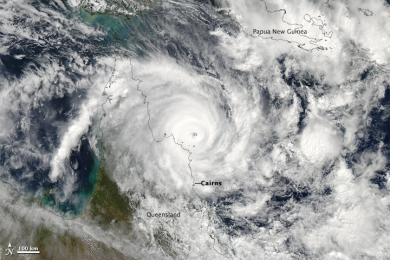 International Charter: Space and Major Disasters was activated on 11 April. Geoscience Australia requested the activation because of the expected Cyclone Ita.

The Cyclone caused flooding in the Solomon Islands, as UN-SPIDER reported, on its way to Australia. The forecast was for it to bring powerful winds and heavy rain also to the Australian coast. More than 30,000 residents of the Coast cities have been evacuate in advance.

As the Storm hit the coast, it was moving with winds at roughly 140 km/h, causing a lot of damages that are still to be assessed. At its strongest, the Cyclone winds reached 232 km\h, category 4 out of 5 possible.