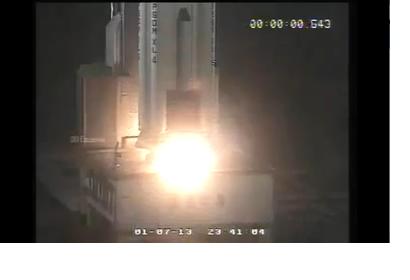 India’s first dedicated navigation satellite, the IRNSS-1A, developed by the Indian Space Research Organisation, was successfully put in orbit on Monday night, as the newspaper The Hindu reported on their website.

The report continues: "The launch vehicle, PSLV-C22, bearing the 1,425-kg navigation satellite, blasted off the launch pad at the Satish Dhawan Space Centre here at the scheduled lift-off time of 11.41 p.m. The IRNSS-1A is the first of the proposed seven satellites in the Indian Regional Navigation Satellite System. Apart from India, its benefits would extend to a range of 1,500 km in the region. With a mission life of 10 years, it will deliver applications ranging across terrestrial, aerial and marine navigation, disaster management, tracking of vehicles, guiding hikers and travellers, and visual-voice navigation for drivers.

Video of the launch