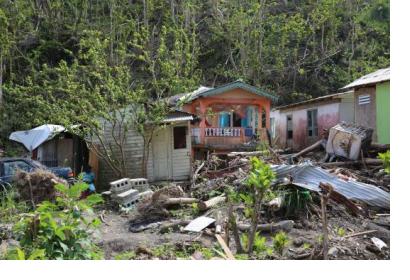 Small and low-income countries can be disproportionately affected by natural disasters. For example, the top ten natural disasters between 1980 and 2017, in terms of greatest damage as a percentage of GDP, occurred in small and low-income countries, according to the International Monetary Fund (IMF) in its June 2019 policy paper, “Building Resilience in Developing Countries Vulnerable to Large Natural Disasters.”

Due to a 2017 storm, the island country of Dominica endured the greatest economic damage relative to GDP during this time period. And overall during this time period (1980-2017), in terms of annual average, Caribbean and Pacific small states experienced the most natural disasters and greatest economic damages (as a percentage of their respective GDP).

One factor contributing to this disproportionate damage in low-income and small countries, in  comparison to other countries, may be their dependence on consistent weather conditions for key economic sectors. Additionally, the private insurance market in these countries is often underdeveloped, meaning severe weather events could have a more detrimental impact on a country’s economic activity and production capacity.

Yet another factor owing to these great damages in small and low-income countries may be the reality that less financial resources and efforts are generally dedicated to resilience building efforts in these countries, when compared with other parts of the world. In the policy paper, the IMF emphasizes the need to dedicate increased financial resources and efforts to building disaster resilience in developing countries and small states vulnerable to natural disasters. The IMF promotes the creation of a nationally-owned disaster resilience strategy in each vulnerable country that could be supported by development partners, such as the IMF.

In addition to the humanitarian benefits that can come from increased investment in resilience, the IMF underscored the economic benefits that could be accrued. In the report, it states, “The benefits of investing in resilience building include lower expected losses from disasters, higher returns to private investment, improved employment and output performance, and better continuity in public services after a disaster.”

Investing in disaster risk reduction for resilience is one of the four priorities of the Sendai Framework for Disaster Risk Reduction and is also an integral part of UN-SPIDER’s work. With the aid of space-based information, UN-SPIDER helps countries improve resilience in the wake of natural disasters. Space-based information can provide important insights about changes in the Earth’s surface over time, can be integrated into maps to provide an overview of a disaster’s impact, and can help emergency responders focus their efforts on individuals and communities most in need, among many other uses. UN-SPIDER’s training activities within vulnerable countries, and online listings of hazard-specific data sources and recommended practices, help countries and emergency managers use space-based information to address all phases of the disaster management cycle.