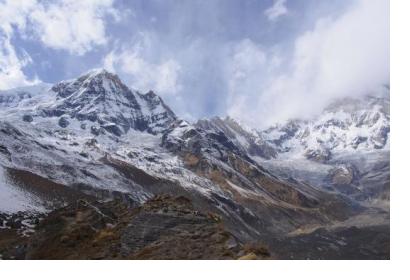 The Hindu Kush Himalayan Monitoring and Assessment Programme (HIMAP), under the coordination of the International Centre for Integrated Mountain Development (ICIMOD), has recently brought together the collective knowledge of over 300 leading researchers, experts and policymakers to develop the first comprehensive assessment of the Hindu Kush Himalaya (HKH) region. The report aims to inform decision-makers with the best science and knowledge in order to sustain mountain environments and livelihoods in the HKH region.

With its coverage of more than four million square kilometers - from Afghanistan to Myanmar - the HKH region is at the same time one of the world’s most ecologically diverse mountain biomes and one of its most hazard-prone areas. Because of its steep terrain, high seismicity, fragile geological formation and intense precipitation, the Himalayan region is especially vulnerable to natural hazards such as floods, landslides, avalanches and earthquakes.

Over the last few decades, the entire region has been increasingly challenged from different factors and human interference, such as urbanization, climate change, human conflicts, and migration flow rise, tourism and infrastructure development.

The report consists of 16 chapters, which comprehensively assess the current state of knowledge about the Himalayan region. One of these is dedicated to disaster risk reduction and building resilience. It aims to provide in-depth analysis as well as policy recommendations in order to manage and reduce the risk and build disaster resilience in the region.

The chapter highlights some key findings:

The main conclusion of the report is that assessing risk without considering the effects of climate change is no longer an option in mountainous areas, which are particularly sensitive to climate change. Mountain communities are more vulnerable as a result of their remoteness, poor accessibility and lack of emergency communication. Thus, sustainable mountain development requires a systematic and integrated risk management approach to avoid or reduce future losses, human and economic.

More specifically, when it comes to disaster risk reduction in the region, the report formulates the following recommendations :

The report underlines that “data and information are a prerequisite for informed decision making for disaster risk reduction”. It highlights the work done by ICIMOD and its regional and international partners in being a facilitator of the use of space technology for addressing disaster management challenges and for supporting risk identification and the development of early warning systems.

ICIMOD is one of 23 UN-SPIDER Regional Support Offices.