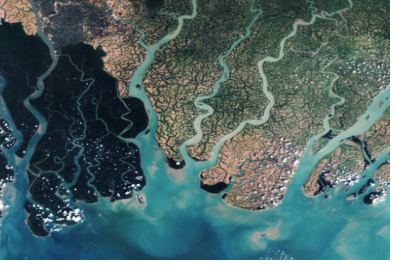 To support emergency response efforts, the International Centre for Integrated Mountain Development (ICIMOD) has mapped the extent of floods in Bangladesh following Cyclone Amphan, which caused widespread damage in the country and neighboring India in mid-May. The maps are based on Sentinel-1 radar imagery. Radar satellite data is commonly used for flood mapping purposes due to its ability to make measurements irrespective of daytime and cloud cover of the scene.

By providing an overview of the extent of inundation caused by the floods, these maps are useful in the context of disaster management, as humanitarian agencies are able to detect areas that have been affected by the floods the most and can coordinate relief and rescue activities accordingly.

The tropical cyclone caused at least 96 deaths in Bangladesh and inflicted substantial damage to infrastructure. The continuous flooding resulting from the cyclone comes during the ongoing COVID-19 pandemic, complicating social distancing norms significantly.

ICIMOD is one of 24 UN-SPIDER Regional Support Offices.