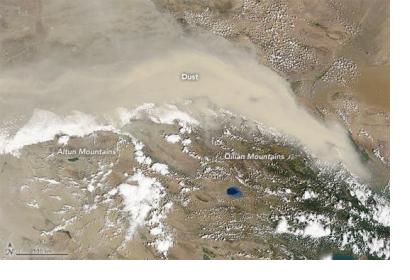 On the 1st of August, the Moderate Resolution Imaging Spectroradiometer (MODIS) on the Terra satellite of the National Aeronautics and Space Administration (NASA) captured some images of large dust storm over the Taklimakan desert.

The Chinese authorities as well as many specialists are concerned about the spreading of deserts in northern China. Indeed, “the combined effects of widespread livestock grazing, over-cultivation of marginal land, deforestation, intensive use of water resources, and climate change” contribute to enlarge dry areas. A study conducted in 2014 showed that more than 3,600 square kilometers of grasslands turned into desert in 2010

The Chinese authorities started to install a “green wall” on the borders of the Taklimakan and Gobi deserts to combat this phenomenon. Since 1978, more than 66 billion of trees have been as part of this green wall.