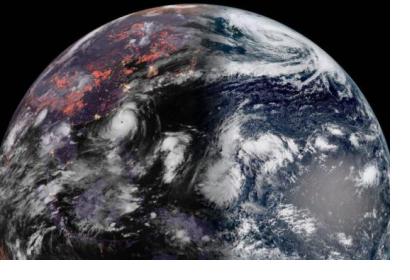 The Japan Aerospace Exploration Agency (JAXA) together with the private sector launched the Himawari-9 on 2 November 2016 from the JAXA’s Tanegashima Space Center in Japan’s southwestern Kagoshima prefecture. It will join Himawari-8 that was launched on October 2014, to complete the next-generation of Geostationary Meteorological Satellites (GMS) that aim to improve meteorological services in the Asia Pacific region, especially giving complete and opportune images of storms, clouds and other weather systems.  Himawari-9’s position will be fixed at 140 degrees east longitude and the mission will serve the Japan Meteorological Agency during the following 15 years.

The old meteorological satellites MTSAT 1R and MTSAT 2, which were launched on 2005 and 2006 respectively, will be replaced by Himawari-8 and Himawari-9. The old satellites were taking update images of East Asia and the Western Pacific every 30 minutes, while the new ones provide up to dated imagery every 10 minutes.

Precise details of typhoons, volcanic ash and smoke plumes, fog and low lying clouds are among the resolution improvements of the Himawari couple.