Heavy rainfall in the southeast of the United States of America 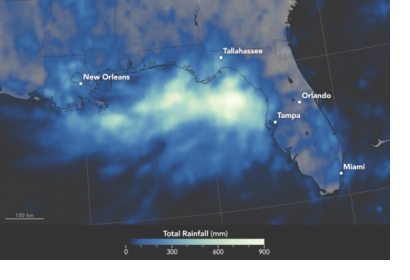 The Integrated Multi-satellite Retrievals for Global Precipitation Measurement (IMERG) of the National Aeronautics and Space Administration (NASA) gathered data on heavy rainfall in the southeast part of the United-States of America.

The downpour affected mostly the north of the Gulf of Mexico with precipitations between 500 and 900 millimeters over the Gulf of Mexico. With precipitations ranging between 300 and 400 millimeters, some areas in Florida and Louisiana may experience floods in low-lying areas.  The State of Mississippi and other parts of Louisiana are expected to be affected by heavy rainfall in the coming days as well.