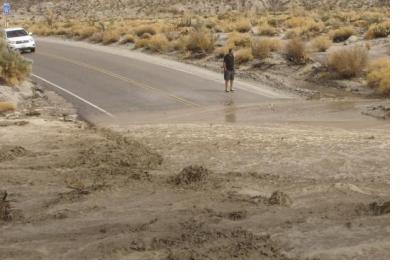 The forecasting of torrential monsoon downpours has become more accurate due to improved GPS and geodetic sensors. The system, developed by meteorologists at the National Oceanic and Atmospheric Administration (NOAA) Weather Forecast Offices in the United States of America has been in use since 2012. It features next-generation, real-time geodetic modules that have been added to existing GPS stations across California, enabling more accurate rain and weather forecasting.

More than half the annual rainfall in the American Southwest falls in the form of the unpredictable downpours during the North American monsoon season. Whilst monsoon precipitation is essential for the ecosystem of the region, the torrential rain often causes flash flooding and hence poses a risk to life and property. Technology that aids the accurate forecasting of these rains is therefore of paramount importance.

The “Next-Generation Real-Time Geodetic Station Sensor Web for Natural Hazards Research and Applications” project, funded by NASA’s Earth Science Technology Office, is a four-year project aiming to develop a network of sensors with the purpose of providing advance warning of potentially dangerous weather and seismic events.

Two weather forecasting offices of the National Oceanic and Atmospheric Administration (NOAA) have benefited from the project, with 37 GPS stations having been added to NOAA’s meteorological existing GPS network in Southern California. The stations have also been outfitted with onsite or nearby meteorological sensors.

GPS satellites provide a method of predicting and forecasting monsoon rainfall as GPS calculations have to account for any signal delays caused by humidity. As such, GPS stations determine moisture indirectly based on how long it takes for the time-stamped signals from the GPS satellite network to reach them. Combined with local temperature and pressure data, the results from the GPS satellites can be used to calculate the Integrated Precipitable Water (IPW), an important meteorological parameter in the forecasting of monsoon rains.

The original network of GPS stations used in this project was established in the 1990s in order to study seismic movement in the area. The entire project is now built upon this network, with the geodetic modules being added to GPS stations across Southern California, enabling more accurate weather forecasting and even early earthquake warnings. The geodetic modules calculate the IPW onsite and transmit them, rather than sending raw data back to a central facility for interpretation, making the system more efficient in the accumulation and processing of significant quantities of data.

The system is still considered a prototype, yet meteorologists have already benefited greatly from the project.

In 2013, access to real-time data from GPS satellites played a critical role in the issuing of flash flood watch in the El Centro region in California (between San Diego and Yuma). With water vapour content spiking around El Centro to levels higher than other cities in the surrounding area, monsoon rains were predicted and a weather warning was circulated.  The warning was indeed followed by several flash flooding events, resulting in roadways being flooded and drivers being trapped in their cars on highways.

Meteorologists and forecasters are now working with project scientists to refine the interpretation of data and to improve the system further.