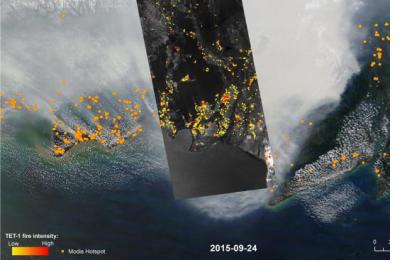 So far, more than two million hectares of Indonesian forest area have been lost due to the forest fires that broke out on 21 June 2015. The National Space and Aviation Agency of Indonesia (LAPAN) expects losses to grow, as large forest areas and peat lands, especially in Kalimantan and Sumatra, are still affected by fires.

Parwati Sofan, a senior official in LAPAN, stated at a press conference which was held at the Natural Disaster Mitigation Agency headquarters in Central Jakarta on 30 October 2015 that “Even though the satellite has helped us [collect the data], bear in mind that it cannot scan the forest areas that are covered in thick haze and clouds (…). We expect the size of burnt area to increase as the data collection is still underway. We will update the data on the burnt area every ten days."

Meanwhile, a German research cooperation effort conducted by the GeoBio Center of the Ludwig-Maximilians-University (LMU) in Munich, the German Aerospace Center (DLR) and the remote sensing services company RSS GmbH of Germany detected additional fire hot spots under the Indonesian haze making use of satellite imagery from the microsatellite TET-1. Due to the higher sensitivity of the sensor in the microsatellite and improved camera resolution, the satellite detects and measures even smaller fire hot spots under the haze. The time series of satellite imagery can therefore contribute to identify the causes of the forest fires, their patterns of dissemination and the speed of fire fronts. Furthermore, the researchers are able to assess additional parameters such as fire temperature and heat production through satellite imagery, providing important information for those in charge of combating the fires.

These severe forest and peat fires, caused by illegal slash-and-burn methods for the clearance of land and the growing of palm oil and timber, are affecting many communities in Indonesia. The weather phenomenon El Niño is increasing the problem of fires as in this region of the world it triggers droughts.