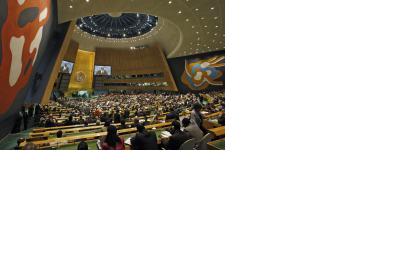 On 23 December 2014, the United Nations General Assembly adopted its resolution A/RES/69/243 of the sixty-ninth session on "International cooperation on humanitarian assistance in the field of natural disasters, from relief to development". The resolution was published on 11 February 2015 and makes explicit mention of the UN-SPIDER programme twice.

In the ten page document, the General Assembly expresses its "deep concern at the increasing challenges to Member States and to the United Nations humanitarian response capacity to deal with the consequences of natural disasters, given the effects of global challenges, including the impact of climate change, the ongoing adverse impact of the global financial and economic crisis and the negative impact of volatile food prices on food security and nutrition, and other key factors that exacerbate the vulnerability of populations and exposure to natural hazards and the impact of natural disasters." The body also addresses the challenges of rural and urban poor communities, the situation of persons with disabilities and the trend of rapid urbanization in the context of natural disasters.

The General Assembly furthermore explicitly makes reference to the UNOOSA/UN-SPIDER programme, recognizing the progress made by the programme in its mission. At the same time, the General Assembly encourages Member States to "provide all support necessary, on a voluntary basis, to UN-SPIDER, including financial support, to enable it to carry out its workplan for 2014–2015, and reiterating the importance of enhancing international coordination and cooperation at the global level in disaster management and emergency response through greater access to and use of space-based services for all countries and by facilitating capacity-building and institutional."

In terms of the necessary technologies to tackle disaster challenges, the General Assembly recognizes the importance of informatoin and telecommunications technologies and "encourages the further use of space-based and ground-based remote sensing technologies, including as provided by the United Nations Platform for Space-based Information for Disaster Management and Emergency Response (UN-SPIDER), as well as the sharing of geographical data, for the prevention, mitigation and management of natural disasters, where appropriate, and invites Member States to continue to provide their support to the consolidation of the United Nations capability in the area of satellite-derived geographical information for early warning, preparedness, response and early recovery."

The resolution is available in all six UN languages.