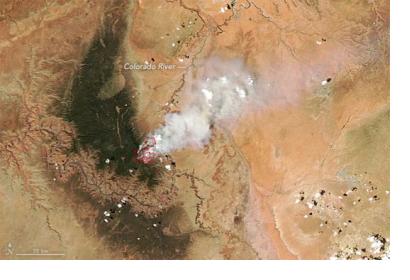 On the 16th of July 2016, the Moderate Resolution Imaging Spectroradiometer (MODIS) on the Aqua satellite from the National Aeronautics and Space Administration (NASA) caught smoke images from space which are related to a fire on the North Rim of the Grand Canyon in Arizona. The red spot on the picture show where the MODIS system detected unusual high temperatures.

The fire was still burning on the 26th of July, according to the National Interagency Fire Fighter.