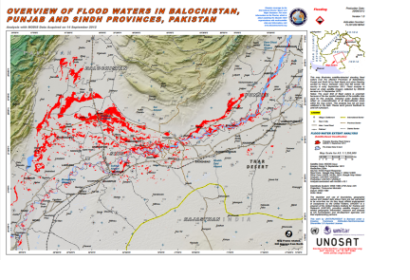 On 18 September 2012, the International Charter: Space and Major Disasters was activated for floods in Pakistan. Torrential rain, which began on 5 September, had caused flash floods in Pakistan leaving an estimated one million people homeless.

A flood map of Balochistan, Punjab and Sindh Provinces in Pakistan (as of 14 Sep 2012) acquired via this activation is now available. This map illustrates satellite-detected standing flood waters over the affected provinces hit by flash floods and urban flooding caused by heavy monsoon rains that fell across the country in early September 2012. Flood analysis is based on crisis satellite imagery collected by MODIS sensors on 14 September 2012.