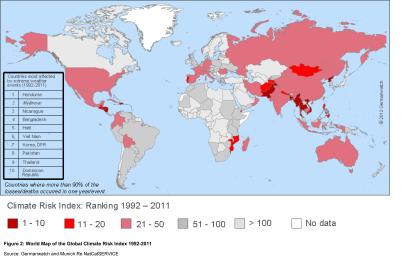 In 2011, poorer developing countries have been hit much harder in average than other countries, according to the new edition of the Germanwatch Global Climate Risk Index (CRI) 2013, which was released in Doha on 27 November. Many of the worst natural disasters of 2011 were also the most severe the affected countries had ever experienced. Brazil, Cambodia, El Salvador, Laos and Thailand appear in the CRI’s 10 most-affected countries; all recorded their severest natural hazards-related catastrophes in 2011. For the period 1992 to 2011, Honduras, Myanmar and Nicaragua rank highest.

Sven Harmeling, Team Leader International Climate Policy with Germanwatch: "Losses and damages from extreme weather events are the reality today in particular in developing countries. The findings of the Germanwatch Climate Risk Index underline this fact. Recent science results also tell us that climate change is an increasing factor in the occurrence of very heavy events. In Doha, we need serious progress in the negotiations on cutting greenhouse gas emissions, on increasing support for adaptation, and the kick-off for the development of an international mechanism to address loss and damage."