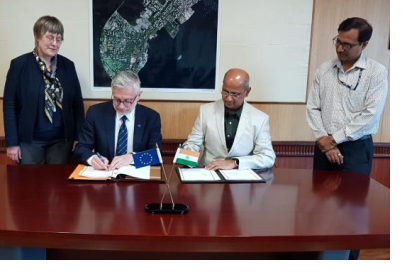 The European Commission (EC) and Department of Space (DoS) of India signed a Cooperation Agreement on 19 March that will enable them to share earth observation data from each other's satellites. This shared space-based information will be used to forecast natural and man-made disasters, to provide emergency response and rescue of people during such disasters, to gather land and ocean data, and for issues related to security, agriculture, climate change and the atmosphere.

Recognising that data sharing will provide mutual benefits, in particular in the pursuit of the United Nations’ Sustainable Development Goals, the EC and DoS of India signed the Cooperation Arrangement with the aim of strengthening and stimulating cooperation on Earth observation and mutual access to the data from the European Union’s sentinel series of satellites and from India’s earth observation satellites.

India has twice made use of the Copernicus programme in the recent years - first when a tropical storm hit the coast of Odisha state in 2013, and when floods hit Andhra Pradesh state in October 2014.

The Cooperation Agreement was signed in Bengaluru, India, by Philippe Brunet, Director for Space Policy, Copernicus and Defence on behalf of the EC and by P.G. Diwakar, Scientific Secretary at the ISRO.

Copernicus is a European Union programme aimed at developing European information services based on satellite Earth Observation and in situ (non-space) data. The programme is a leading provider of Earth observation data across the globe. It helps save lives at sea, improves our response to natural disasters such as earthquakes, forest fires or floods, and allows farmers to better manage their crops, collects data from Earth observation satellites and ground stations, airborne and sea-borne sensors. Copernicus processes data and provides users with reliable and up-to-date information through a set of services in six thematic areas: land monitoring, marine monitoring, climate change, emergency management response and security.