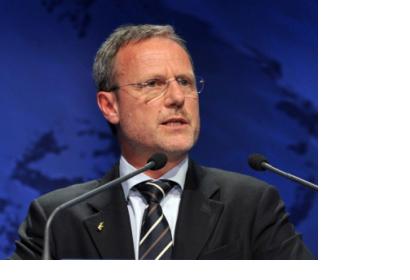 The European Space Agency (ESA) has sent letters to its member governments asking them to protest a decision by the European Commission to remove Europe’s flagship environmental program from the commission’s proposed multiyear financial envelope, ESA’s director of Earth observation said. The 19-nation ESA also will be taking its case to the European Parliament in an effort to find a place in the commission’s seven-year budget for the multibillion-dollar Global Monitoring for Environment and Security (GMES) program, he said. Volker Liebig, whose directorate has already spent more than 1.6 billion euros ($2.2 billion) preparing GMES and its fleet of Sentinel satellites, specifically denied a commission allegation that GMES is, or threatens soon to be, over budget.

In its proposed seven-year budget, the commission — which is the executive arm of the 27-nation European Union — lumps GMES together with the European-led ITER next-generation nuclear reactor, which has suffered multiple cost overruns and is still years away from being fully operational. Programs like these, the commission says in its budget proposal, should not be included in the fixed multiyear budget, which covers the period from 2014 to 2020.

“This is just not true,” Liebig said of the commission’s assumption about GMES’s likely cost at completion. “It is true that we have had to spend a bit more on launchers than we expected, but we have reduced work in other areas to compensate. We also changed the requirements of data delivery so that it would be available to users one hour after being collected by the satellite, not three hours. But this has not had any serious budget impact.”

ESA, which is overseeing development of the first GMES Sentinel satellites, has kept the commission fully informed of GMES’s cost status, he said. Liebig said he was particularly surprised that the commission elected to include the Galileo satellite navigation constellation in its seven-year budget proposal despite the fact that the 30-satellite Galileo constellation is years behind schedule and, even after a recent effort to rein in costs, still expected to cost 40 percent more than its 3.4-billion-euro budget.

“I personally believe this is a very dangerous approach,” Liebig said, referring to the difficulty of asking governments to make individual contributions to the program at a time of such tight public budgets. Liebig said it may have been easier for the commission to include Galileo, despite its ongoing budget issues, because the commission has legally taken ownership of the Galileo program. That is not the case for ITER, which is a global effort on advanced nuclear power. Nor is it true of GMES, whose ownership has yet to be decided. The commission has paid more than 700 million euros for GMES, focusing on developing value-added services with the private sector.

Liebig said that GMES development is on schedule and within its budget, with the first of the Sentinel satellites to be launched in 2013. ESA and the commission have agreed to order identical copies of the first three Sentinel satellites to take advantage of scale economies offered by their contractors. ESA had wanted to order so-called “C units” — third copies of the same satellites — to reduce unit costs still further. However, that was not possible because the commission was unable to commit to the budget.

If the decision is not reversed, it will mean the commission has agreed to fund its share of GMES through 2013, but not beyond, during the period when the satellites will be put into use. Liebig said the design of the Sentinel satellites is so far along that the critical technical milestones that might pose budget problems have been cleared. Liebig said none of the Sentinel designs faces any serious production hurdles in the next two years that could be construed as budget threats.

In the budget proposal, the commission says it will ask that individual governments sign up to fund GMES, whose annual costs the commission and ESA estimate are 834 million euros per year. This figure includes not only funding GMES operations, but also includes replacement of satellites when they are retired. Liebig said there is little chance that ESA, which as a research and development agency typically does not fund programs of repeat satellites, will be able to step in for the commission and fund GMES operations itself.