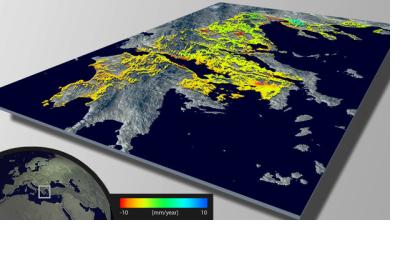 The European Space Agency ESA has developed a new Wide Area Processor, or WAP. The data processor can create maps of land deformation from satellite radar data over larger areas and with higher precision than ever before. These maps can be used to detect and monitor geological hazards.

Factors like mining, earthquakes or volcanoes can make the ground sink or rise. In order to measure these changes, radars on satellites can map the changes on a global scale and with millimetre-precision.

ESA explains how the new processor works: "WAP has been developed to process the full radar data over a specific area automatically and then mosaic adjacent datastacks with uniform quality, yielding country-sized maps of land deformation with unprecedented accuracy."

"To do this, the WAP applies the remote sensing technique ‘persistent scatterer interferometry’. Persistent scatterers are stable objects that reflect radar well, such as metal structures and buildings, and are continuously present as the satellite orbits Earth. By measuring the point scatterers within the resolution cell of each radar image and combining images acquired over time, millimetre terrain deformations can be estimated."

During its trial period, the WAP has mapped half of Greece's mainland and saw up to 200 scatterers per sq km in rural areas like Athens. By mapping terrain deformation over the last ten years, the maps showed that some areas are sinking by about 10 mm per year.