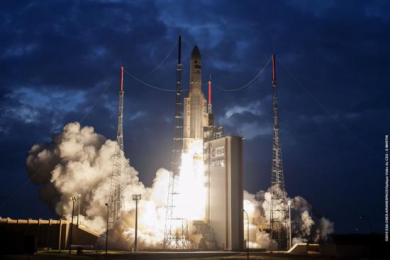 European Space Agency’s (ESA) latest weather satellite has been successfully launched and put into orbit from Ariane 5 launcher at the Kourou Space Station (French Guiana) on July 15. The space artifact, called MSG-4, is part of the Meteosat Second Generation series that offers meteorological information over Europe and Africa every 15 minutes and a ‘rapid scan’ imagery over Europe every five minutes.

Forty minutes after the launch, the satellite separated from the launcher and was set into orbit, but it would take 10 days until it will be raised into a geostationary orbit some 36 000 km above the equator, where its speed matches Earth’s rotation.

The satellite was designed, developed and put into orbit by ESA, but will be operated by its owner, the European Organisation for the Exploitation of Meteorological Satellites (Eumetsat).

Johann-Dietrich Woerner, ESA’s Director General, stated that “Tonight’s launch allows the continuation of high-quality observations of weather from space, including rapid detection and warning of extreme weather situations – imperative for keeping European citizens safe.” ESA is also involved in the Meteorological Operational satellites MetOp and has developed the Sentinel satellites for atmospheric monitoring.