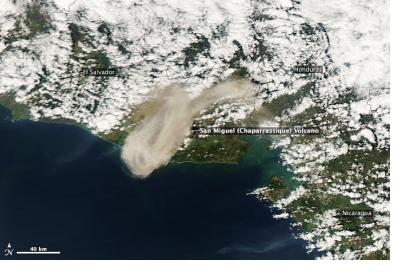 On Sunday morning, 29 December 2013, Chaparrastique volcano in eastern El Salvador (San Miguel) erupted forcing thousands of people to leave their homes. Everyone within a 3km (2 mile) radius had to be evacuated, as BBC reported. The ashes were blown more than 71 kilometers (44 miles) downwind, as this natural color satellite image captured by the Moderate Resolution Imaging Spectroradiometer (MODIS) on NASA's Aqua satellite shows.

Volcanologist Francisco Barahona, as elsavador.com quoted, suggested that this explosive eruption was caused by water vapor pressure. NASA however reported that the strength of the eruption and high concentrations of sulfur dioxide (a volcanic gas) measured by NASA’s Ozone Monitoring Instrument from Space indicated that some fresh lava was involved.

According to BBC, the Salvadoran government had been monitoring the situation since 13 December, when they detected increased activity inside the volcano.