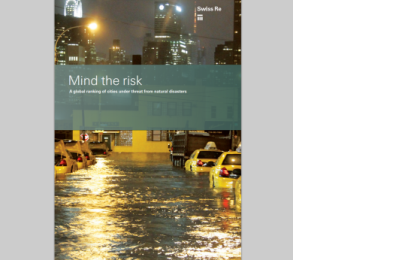 "Mind the Risk: A global ranking of cities under threat from natural disasters" is the title of a recent report published by the reinsurance company Swiss Re. Looking at both human and economic risks faced by urban communities, the study puts Asia's megacities (Tokyo, Manila, Hong Kong-Guangzhou) on the top of the list for population-at-risk while European and US cities (Amsterdam-Rotterdam, Los Angeles, New York) lead the ranking for the highest loss potential.

Swiss Re elaborates that some hazards present a greater danger to cities that others: "The study shows that floods endanger more city residents than any other natural peril, followed by earthquakes and storms. When they occur, they can affect millions of people and significantly disrupt the economy." The report concludes: "As many of these risks are likely to materialise in urban locations, building resilience in the world’s cities is an urgent priority. But resource limitations and budget constraints make this a challenging task for mayors, city planners and local disaster risk managers. This study aims to support theirwork by providing new insights into the potential impact of natural disasters on urban communities."