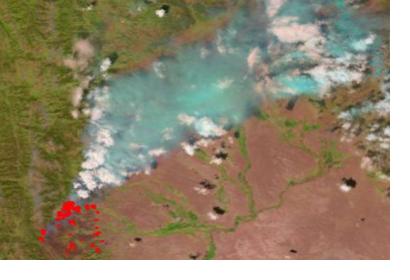 Since several years ago, satellites have been used to detect fires. The Moderate Resolution Imaging Spectroradiometer (MODIS) sensor onboard NASA’s Terra and Aqua satellites has been used to scan the Earth’s surface for fires on a daily basis for almost 15 years. Since 2012, the Visible Infrared Imaging Radiometer Suite (VIIRS) onboard the Suomi NPP satellite has contributed to this effort by producing higher resolution images of the Earth’s surface.

These satellites have similar orbits, but the spatial resolution of their sensor’s thermal bands is different. The thermal band of MODIS has a 1,000 meters resolution per pixel whereas VIIRS has a 375 meters resolution per pixel. This higher resolution enables VIIRS to detect fires that MODIS overlooks. Though VIIRS is a more sensitive instrument when it comes to detecting fires, MODIS provides crisper background images. This is attributed to the fact that MODIS has a 250 meters spatial resolution for other than the thermal bands and thus can produce more detailed land surface images. Nevertheless, VIIRS is well suited tool for monitoring fire activity. It enables scientists and firefighters to model and predict shifts in a fire’s behavior more accurately.

Wilfrid Schroeder, scientist at Maryland University and principal investigator of the VIIRS active fire data product, expressed his hope that the incorporation of the use of high-resolution fire detection data into fire behaviour models and in tactical fire situations would facilitate the work in wildfire management.

Other applications of VIIRS include the estimation of greenhouse gas volume released into the atmosphere as a result of a fire, and the identification of and the initial location of prohibited fires.