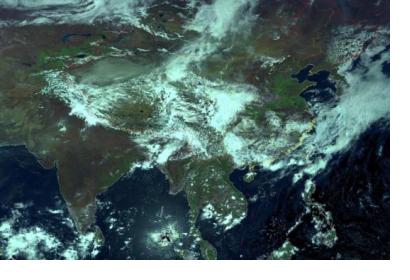 China has established an emergency mechanism using its meteorological satellites to help countries involved in the Belt and Road Initiative to combat extreme weather and disasters, the China Meteorological Administration (CMA) announced on 2 May.
Countries along the Belt and Road Initiative, which are suffering from meteorological disasters such as typhoons, rainstorms, wildfires and sandstorms, may apply to China to activate the mechanism. These countries will then receive get high-frequency satellite data from China’ Fengyun satellites via the CMA. Such timely and accurate information may prove essential to national authorities when providing disaster relief. The availability of such satellite data to assist in dealing with disasters could particularly benefit countries which do not currently have access to such information.
A spokesperson for CMA said that the emergency mechanism was established in response to a request from the World Meteorological Organization in mid-April 2018 to get more satellite data of the Indian Ocean region through China's geostationary satellites.
China has launched 16 Fengyun satellites, the first in 1988, and nine are operational. Five of these are in geostationary orbits, at around 36,000 kilometres above the Earth, with four in much lower Sun-synchronous orbits at an altitude of around 800 km. From 8 May, the Fengyun-4A satellite started to serve users in the Asia-Pacific region. The satellite is the first of China's second-generation geostationary weather satellites. It will provide data and products to the customers in Southeast Asia, East Asia and Oceania besides China itself, which will help to improve their capacity in meteorological disaster prevention and disaster risk reduction.
Further to these developments, on 8 May China launched Gaofen-5, a hyperspectral imaging satellite. The satellite is part of the China High-resolution Earth Observation System (CHEOS) programme. Gaofen-5 is the first Chinese-developed satellite that can monitor air pollution. CMA also says that it is the world's first full-spectrum hyperspectral satellite to provide a comprehensive observation of the atmosphere and land. Gaofen-5 can also detect inland water and land surface environment, providing reliable data for China's environmental monitoring, resource exploration, as well as disaster prevention and mitigation. The satellite will also contribute to the Belt and Road Initiative. The China National Space Administration (CNSA) plans to launch the Gaofen-6 satellite later in 2018, forming a constellation with the other Gaofen satellites already in orbit.
The Belt and Road Initiative
As explained by the United Nations Development Programme (UNDP), China’s Belt and Road Initiative, also referred to as One Belt, One Road; is an economic framework developed to increase connectivity between China and over 100 countries and international organizations, based on the ancient Silk Road land and maritime routes. The Belt and Road Initiative aims to link different regions through infrastructure construction, transport and economic corridors and by bridging China with the rest of the world both physically, financially, digitally and socially.
The Spatial Information Corridor
The Spatial Information Corridor is a companion project to the terrestrial components of the Belt and Road Initiative, the Silk Road Economic Belt and Maritime Silk Road. According to the China National Space Administration (CNSA), the Spatial Information Corridor will offer a range of services to Belt and Road countries including remote sensing, communications and broadcasting, the Beidou satellite navigation system, as well as satellite positioning services for applications including telemedicine, disaster relief, transport, entertainment and counter-terrorism.  The satellite coverage will also provide data on a number of areas including polar ice, water resources and the atmosphere.
The China National Space Administration also says that the Spatial Information Corridor will assist in the capacity-building of developing countries in line with the United Nation’s Sustainable Development Goals while also contributing to UNISPACE+50.
This article was contributed by Jack Kavanagh, UN Online Volunteer mobilized through www.onlinevolunteering.org.
Chinese satellites to provide emergency response for Belt and Road countries
Tue, 05/22/2018 - 14:45
Asia