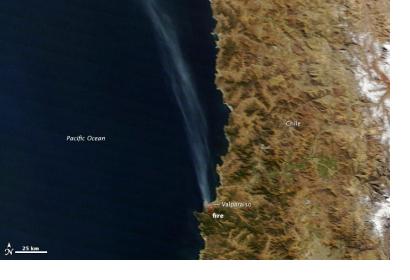 The International Charter: Space and Major Disaster was activated on 14 April due to forest fires, near the city Valparaiso, Chile. The fires have killed 12 people and over 10 thousands were evacuated.

The fires started on Saturday, 12 April, and moved towards the city destroying more than 500 homes. Minor explosions were detected and smoke spread is causing breathing problems to the citizens. Firefighters are trying to stop the spread of the fire, but coastal winds and expected rise in the temperature are threatening to push the fires back into the city.