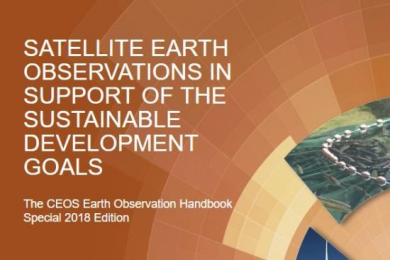 Established under the 1984 G7 Economic Summit of Industrial Nations, CEOS helps to facilitate the coordination and integration of the actions and policies of over 30 of the world’s leading space agencies.

The UN’s SDGs are a universal call to action created in 2015, consisting of 17 concrete goals created to guide policy and action towards a more sustainable future. These goals aim to eradicate poverty and inequality, protect the planet’s natural resources, and promote a more sustainable global infrastructure by 2030.

This new handbook by CEOS allows readers to gain a broader understanding of the role that satellite Earth observation plays in assisting the development of the majority of these 17 goals, in addition to aiding in national development policies and reporting.

The handbook delves in-depth into each of the SDG goals that it affects and shows how Earth observation can be used to achieve them, highlighting specific cases in which EO has been used in the past to aid in the realisation of goals such as hunger alleviation, clean water, sanitation, and more.

This publication is a coordinated effort headed by the European Space Agency, with The Commonwealth Scientific and Industrial Research Organisation (Australia), and Symbios Spazio.