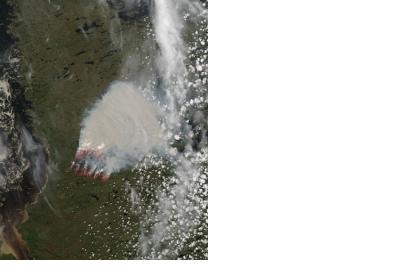 Satellites can easily detect what is not visible to the human eye. NASA's Aqua satellite acquired imagery of a large wildfire burning in Western Quebec on 19 June 2013, near the shoreline of Hudson Bay. By using its MODIS (Moderate Resolution Imaging Spectroradiometer), the satellite could detect hot spots with unusually warm surface temperatures associated with fire - indicated by the red outlines.

NASA regularly publishes satellite imagery on their MODIS Rapid Response Gallery. Both NASA's Terra and Aqua satellite are equipped with MODIS sensors. Terra's orbit around the Earth is timed so that it passes from north to south across the equator in the morning, while Aqua passes south to north over the equator in the afternoon. Terra MODIS and Aqua MODIS are viewing the entire Earth's surface every 1 to 2 days, acquiring data in 36 spectral bands, or groups of wavelengths (see MODIS Technical Specifications). These data will improve our understanding of global dynamics and processes occurring on the land, in the oceans, and in the lower atmosphere.