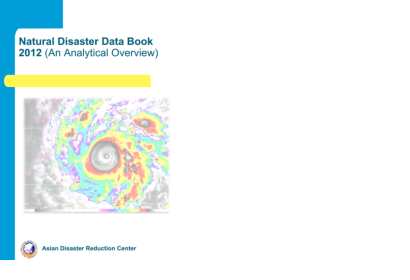 The Asian Disaster Reduction Center, one of UN-SPIDER's Regional Support Offices, has published the Natural Disasters Data Book 2012. The document provides the statistical perspectives in figures and tables for 2012 as well as for the period 1983-2012 based on data obtained by EM-DAT.

The main findings presented in the document include that 328 natural disasters occurred in 2012 worldwide, killing 10,783 people and affecting over 104 million people. The estimated amount of economic damage came close to US$142 billion.

The Data Book 2012 also contains tables of the 25 worst disasters by number of people killed and total affected people, economic damage, and their respective ratios to population and gross domestic product. It also includes tables of 2012 disasters in ADRC member and other Asian countries sorted by country and disaster type.

The data book is freely available online on ADRC's website.