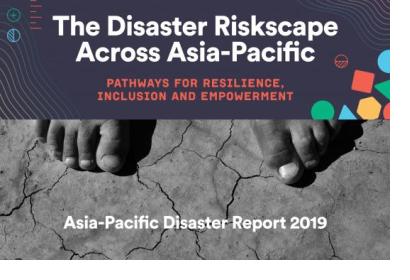 A new report warns that the Asia-Pacific region is not sufficiently prepared for a new climate reality marked by an intensification and changing geography of disaster risks that are becoming harder to predict. The “Asia-Pacific Disaster Report 2019”, a biennial publication by the United Nations Economic and Social Commission for Asia and the Pacific (ESCAP), finds that slow-onset disasters – included for the first time in its risk estimates – account for nearly two thirds of disaster losses in the region. Big data applications based on satellite imagery and other data sets are expected to help mitigate the challenges of this new climate reality, which also need to be addressed through risk-informed policies and investments in resilience.

When disasters strike, they do not only hit the poorest - more likely to live in high risk areas - but almost 40 per cent of impacts affect the social sectors of health, education and livelihoods, which are critical to reducing inequalities and consolidating development gains. To avoid the vicious cycle of poverty, disasters and inequality that threatens sustainable development, the report calls for comprehensive portfolios of risk-informed investments in social sectors. It also identifies four disaster risk hotspots in the region where such socioeconomic vulnerabilities are converging with fragile environments: transboundary river basins, the Pacific Ring of Fire, Pacific Small Island Developing States, and sand and dust storm risk corridors.

As climate change adds complexity to disasters that tend to deviate from past patterns, they have become more difficult to predict despite enhanced technology and greater data availability. However, the report underlines the positive role big data applications based on satellite imagery and other data sets are playing in all phases of the disaster management cycle.

The use of risk analytics helps understand, monitor and predict the risk of slow- and rapid-onset disasters, enabling impact-based forecasting and risk-informed early warning. As an example, the report compares super typhoon Saomeo in 2006 and typhoon Mangkhut in 2018 and finds that “[t]yphoon Mangkhut was tracked and monitored frequently by eight dedicated satellites as opposed to the three for Saomeo in 2006. Further, Mangkhut’s track was forecast using cone areas indicating possible dynamic risk zones, providing a more precise location of possible impacted areas”.

At the same time, big data applications are also increasingly used for damage assessments and reconstruction efforts. For instance, in the case of the 2018 Sulawesi earthquake, the World Bank used the Global Rapid Post-disaster Damage Estimation methodology using input from a variety of sources. Stakeholders had access to sector-based preliminary economic loss estimates and the spatial distribution of damages within two weeks after the disaster.

To ensure that the Sustainable Development Goals (SDGs) are achieved by 2030, the “Asia-Pacific Disaster Report 2019” calls upon Governments to implement risk-informed policies and investments supported by emerging technologies to empower the most vulnerable populations.