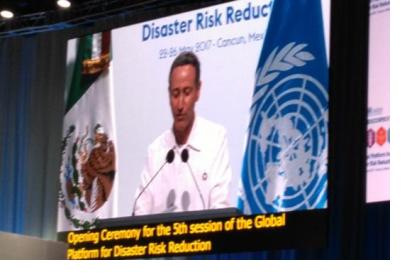 The Global Platform for Disaster Risk Reduction 2017 officially opened yesterday in Cancun, Mexico, following its launch on Monday. This highly regarded international forum dedicated to the disaster risk reduction agenda is expected to draw in over 5000 participants from across the globe, over the course of this week. It also marks the first opportunity for the international community to review global progress in the implementation of the Sendai Framework for Disaster Risk Reduction, which was adopted in Japan in 2015.

The Global Platform for Disaster Risk Reduction (Global Platform), as recognized by the UN General Assembly, is considered the main convention at the global level for strategic advice, coordination, partnership development and the review of progress in the execution of international instruments on disaster risk reduction. It is now the world’s foremost gathering of stakeholders committed to reducing disaster risk and building the resilience of communities and nations. The Global Platform sessions are therefore critically important for the exchange of ideas and concepts directly relating to the unified vision of achieving key Sendai Framework targets.

UNOOSA has a long-standing engagement in promoting science and technology for disaster risk reduction. Science and technology, including Earth observation, provides critical inputs for disaster risk reduction - not only at international, national and regional levels, but at the local level also. UNOOSA, through its UN-SPIDER programme, is committed to promoting integrated applications of space technologies for implementation of the Sendai Framework. UN-SPIDER is working on making these outcomes usable for developing countries by, for instance, publishing recommended practices, links and resources and the space application segments on the UN-SPIDER Knowledge Portal. Concrete examples of solutions to bridge the gap between science and policy-making in disaster risk reduction, for local and national planning processes, will be presented.

During the opening ceremony, speakers highlighted the steadily increasing awareness of the relevance Disaster Risk Reduction (DRR), which has lead to a reduction in losses. DRR has benefited from the contribution of science, early warning systems, and growing political commitment. Progress achieved so far has been outstanding, however a rapidly warming planet may wipe out such outcomes and prevent the international community from achieving the Sustainable Development Goals (SDGs).

With nearly 2 millions square kilometers, the 2017 Global Platform host country of Mexico has a privileged location. However, one quarter of the population of Mexico is exposed to hurricanes and one half is exposed to earthquakes. Mexico has ensured that protection of life is a priority and established civil protection as a pillar. It understands that knowing who to call can be the difference between life and death. The country’s diversity is expressed in Quintana Roo, where the host city of Cancún is located. Here, one of the most advanced cultures of the past flourished, the Maya culture. They left marvelous architectonic ruins as well as knowledge about their efforts to address natural hazards. The Temple of the God of the Wind in Tulum represents the first Early Warning System.

Thanks to their learning efforts, Quintana Roo has been able to confront hurricane Wilma successfully in 2005. At the provincial level, the state implements a variety of measures in DRR related to forest fires, hurricanes, and vulnerability and disaster preparedness efforts. As a result of a dialogue between private and public sector, the tourism sector is now ready to protect tourists in case of such natural hazards. The state has implemented more than 800 locations, which can provide shelter to more than 113,000 persons. Those challenges become opportunities to continue improving DRR efforts and efforts in the area of tourism.

During the keynote addresses, it was remarked that the Sendai Framework puts people at the centre of DRR efforts. Disasters are often a result of a combination of factors that could be prevented, including improper settlements. Mexico has experienced disasters and the hard work associated with reconstruction and recovery, and has learned that working on prevention to build the resilience of communities is crucial to limit the impact of disasters. Prevention is a priority, whether related to hazards or social threat.

Speakers emphasised that DRR lies at the heart of the SDGs, prosperity, dignity, and poverty eradication and human rights that not one should be left behind. The SDGs will not be achieved unless we focus on DRR and climate change. Despite the progress we’ve witnessed, much remains to be done in the area of DRR in lower and middle income countries. Human and economic losses cannot progress if we wish to achieve SDGs. Disasters lead to increased poverty and create losses equivalent to their GDP. Haiti lost 130% of its GDP in 2010 and 30% of its GDP last year due to hurricane Matthew. The international community needs to reduce levels of exposure and vulnerability and avoid the creation of new risks by addressing its drivers - climate change, weak governance, rapid unplanned urbanizations, and the rise of uncontrolled settlements. Disaster Risk Reduction is integral to the 2030 Sustainable Deevelopment Agenda and the Global Platform in Cancun represents an opportunity for countries to move into action.

Strategies are required to in order to reduce exposure and vulnerability in poor communities. This aligns well with UN system approach to integrate efforts. DRR and resilience to Climate Change and other shocks is essential to the SDGs. The international community need to have the right capacities, break silos and increase resilience, including by strengthening existing partnerships.

In line with paragraph 41 of the Sendai Framework, speakers reiterated that particular attention to be given to Small Island Developing States due to their high vulnerability and risk.

During the opening ceremony, it was underlined that the most important lesson learned from past disasters is the need to act in a preventive way - acting on time is good, but being preventive is essential. Natural hazards do not recognize neither political borders nor government decisions. They affect the poorest, the most vulnerable. The 2017 Global Platform allows the international community to address ways to reduce risk and advance together on practices related to prevention.