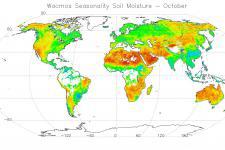 What is soil moisture data used for?

Soil moisture is closely linked to two meteorological hazards: floods and droughts. Soils that have become too saturated cannot absorb additional water, which leads to increased surface runoff and flooding. Monitoring of soil moisture can help improving the accuracy of flood prediction to better prepare for such events (cf.related news article). Soil water deficiency, on the other hand, leads to agricultural drought. It can be observed earlier than plant water stress and reduced biomass. Measuring soil moisture in the root-zone of crops during the growing season helps detecting the onset and severity of drought (cf.related news article). This information can be used for famine early warning. A good example is the current Satida project of the Vienna University of Technology, which aims at decreasing the gap between research and end-user needs to improve drought risk assessment using satellite-based soil moisture data. Due to its role in the climate system, soil moisture was recognized in 2010 as one of the Essential Climate Variables (ECV), which were defined by the Global Climate Observing System (GCOS).

How is soil moisture measured from space?

Soil moisture is measured by active microwave scatterometers such as ERS1&2/AMI and MetOp/ASCAT as well as by passive microwave radiometers such as Aqua/AMSR-E, Coriolis/WindSat, DMSP 5D-2,-3/SSM I, GCOM-W1/AMSR2, Nimbus-7/SMMR, TRMM/TMI, and SMOS/MIRAS. All these active and passive microwave sensors are weather-independent, i.e. they can look through clouds, and they can take images at day and night. Accurate soil moisture estimates are limited to regions that have either bare soil or low to moderate amounts of vegetation cover.

Active microwave scatterometers measure the backscattering coefficient, i.e. the sensor transmits a radar signal and measures the backscattering of the transmitted microwave which is reflected on the ground. The backscattering coefficient is dependent on the dielectric properties of the soil surface layer, surface roughness, and vegetation. Water is the only naturally abundant medium with a high dielectric constant. The radar is sensitive to the soil's dielectric constant, a property that changes in response to the amount of water in the soil. In a greyscale backscattering image, brighter pixels indicate higher soil moisture than darker pixels. Passive microwave radiometers measure the microwave radiation emitted from the surface, which is then transferred to soil moisture estimates.

New satellite missions for soil moisture measurements include ESA's recently launched Sentinel-1 as well as NASA's Soil Moisture Active Passive (SMAP), which is planned to be launched no earlier than mid-December 2014. Thermal bands of optical sensors, such as bands 10 and 11 of Landsat-8, can also be used to estimate soil moisture.

Satellite imagery for soil moisture estimation is partly available free of charge, for example data of Sentinel-1 (published in October 2014) and Landsat-8. Others have to be purchased. The good news is: You do not have to start from scratch and process raw data to derive soil moisture information.

Other soil moisture datasets include:

All of these datasets are free of charge.

This animation shows global monthly averages of soil moisture in the early 1980s in litres per m3, followed by changes in global soil moisture to present. Major anomalies are highlighted, such as the 1992 flooding in Afghanistan, the 2005 drought in the central US, Russia’s heatwave in 2010 and Australia’s floods in Queensland in January 2011.

Soil moisture datasets are included in the UN-SPIDER database on data sources. If you are missing a dataset or if you have any suggestions regarding the database, contact us via the the contact button on the top right of this page, please.