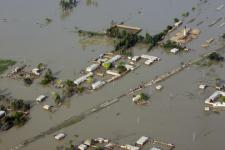 A general and temporary condition of partial or complete inundation of normally dry land areas from overflow of inland or tidal waters from the unusual and rapid accumulation or runoff of surface waters from any source[i].

Floods can have both positive and negative impacts. They can bring welcome relief for people and ecosystems suffering from prolonged drought, but also are estimated to be the most costly natural disaster. Flooding occurs most commonly from heavy rainfall when natural watercourses do not have the capacity to manage excess water. However, floods are not always caused by heavy rainfall. They can result from other phenomena, particularly in coastal areas where inundation can be caused by a storm surge associated with a tropical cyclone, a tsunami or a high tide coinciding with higher than normal river levels. Dam failure, will result in flooding of the downstream area, even in dry weather conditions.

Flood damage refers to all varieties of harm caused by flooding[iii]. It encompasses a wide range of harmful effects on humans, their health and their belongings, on public infrastructure, cultural heritage, ecological systems, industrial production and the competitive strength of the affected economy. Some of these damages can be specified in monetary terms, others – the so called intangibles – are usually recorded by non-monetary measures like number of lives lost or square meters of ecosystems affected by pollution. Flood damage effects can be further categorized into direct and indirect effects. Direct flood damage covers all varieties of harm which relate to the immediate physical contact of flood water to humans, property and the environment. This includes, for example, damage to buildings, economic goods and dykes, loss of standing crops and livestock in agriculture, loss of human life, immediate health impacts, and contamination of ecological systems. Indirect or consequential effects comprise damage, which occurs as a further consequence of the flood and the disruptions of economic and social activities.

This damage can affect areas quite a bit larger than those actually inundated. One prominent example is the loss of economic production due to destroyed facilities, lack of energy and telecommunication supplies, and the interruption of supply with intermediary goods. Other examples are the loss of time and profits due to traffic disruptions, disturbance of markets after floods (e.g. higher prices for food or decreased prices for real estate near floodplains), reduced productivity with the consequence of decreased competitiveness of selected economic sectors or regions and the disadvantages connected with reduced market and public services.

See also an example of the flood disaster impacts in Nepal.

There are several things to do in an emergency situation.

Other important things should be done in an emergency situation are[v]:

See also an example of what to do before, during, and after a flood in California.

The aim of planning the mitigation against flood is to reduce human suffering caused by flood and increase the sense of security of flood victims[vi]. Mitigation against flood can be measured through several alternatives; for instance constructing flood proof houses, planting, government planning, etc. But there are other non technical issues that should be considered on flood mitigation. First, community habits especially waste disposal. Many communities are not aware of this issue and, for instance, dispose tons of waste in nearby rivers. Second, identify the vulnerable people. Third, identify the most important things to carry during a flood. Fourth is the community knowledge on flood orientation, including safe areas, etc.

See also an example of flood risk mitigation in New Zealand and Philippines.