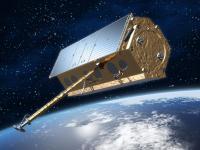 TerraSAR-X is a German Earth-observation satellite. Its primary payload is an X-band radar sensor with a range of different modes of operation, allowing it to record images with different swath widths, resolutions and polarisations. TerraSAR-X thus offers space-based observation capabilities that were previously unavailable. The objective of the mission is to provide value-added SAR (Synthetic Aperture Radar) data in the X-band, for research and development purposes as well as scientific and commercial applications.
The successful launch of TerraSAR-X on 15 June 2007 at 08:14 local time from the Russian Baikonur Cosmodrome in Kazakhstan marked the start of a campaign to map the Earth at an unprecedented level of accuracy. The aim is to create new, high-quality radar images of the Earth’s surface.