First satellite for Turkmenistan in space 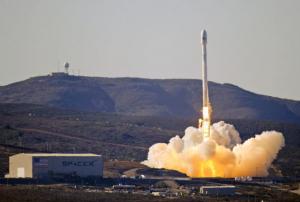 After waiting 49 minutes for clouds to thin out, the Falcon 9 rocket lifted off into space with a satellite for Turkmenistan from Cape Canaveral spaceport this Monday (April 27). The communication satellite is the Central Asian nation's first satellite. Thales officials said the satellite was healthy and transmitting signals after the launch.

The ground controllers will park the spacecraft in geostationary orbit at 52 degrees east longitude, where the satellite will hover over the equator as it circles Earth at the same speed of the planet’s rotation. This 52 degrees east slot is registered by the International Telecommunications Union to Monaco giving the satellite its unusual name: TurkmenAlem52E/MonacoSat.

The Thales Alenia Space will transfer control of the spacecraft to Turkmenistan’s Ministry of Communications by early June, giving the country command of its first satellite.