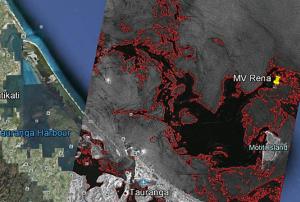 A new satellite image that shows the likely spread of oil from the Rena suggests things may be worse than many realise.

The satellite image was captured by DLR, the German Aerospace Centre, by its TerraSAR satellite on Friday and shows the likely spread of oil from the ship, which remains stuck on the Astrolabe Reef off the coast of Tauranga.

The ship has spilled more than 350 tonnes of oil since it struck the reef on October 5 and is expected to leak more with rough weather predicted later today.

The satellite image has been provided to Maritime New Zealand by the aerospace centre after it was requested by Venture Southland, which has been pushing for receivers for such images to be based at Awarua.

Venture enterprise projects manager Robin McNeill said the satellite sent a pulse to earth, which was reflected back to it and worked into an image.

It worked like an ordinary ship's radar, but more specialised and while it needed a trained…

The Pacific Platform for Disaster Risk Management 2011 offered an opportunity to share experiences and knowledge in relation to initiatives that are being implemented by Pacific island countries and territories to strengthen resilience to disasters. The Platform brought together disaster managers of Pacific island countries and territories, chief executive officers of Ministries of Finance/Planning and Disaster Management, and representatives of national, regional and international development partner organizations, donors, civil society and the private sector.

UN-SPIDER attended and contributed to the main annual Pacific regional meeting. A plenary presentation focused on the work being carried out in the region, supporting the Small Island States, particularly Fiji, Samoa and Tonga. You can access the UN-SPIDER presentation of the event here.

A satellite has mapped the aftermath of the earthquake that devastated Christchurch, New Zealand, showing how the ground deformed, researchers say. Radar data from the Japanese Alos spacecraft show the magnitude 6.3 tremor that killed more than 160 people Feb. 22 was centered directly under the city's southeastern suburbs, the BBC reported Monday.

The "map" made by combining a sequence of radar images acquired before and after the quake showed that in some places the ground rose almost 20 inches while other areas sank."It's like a contour map but it's showing to the southeast of Christchurch that the ground motion is towards Alos. That's uplift," John Elliott at Oxford University in the United Kingdom said.

Scientists are using the Alos information to understand the future seismic hazards in this part of New Zealand, including "blind" faulting -- faulting at risk of rupture but which shows little surface evidence of its… 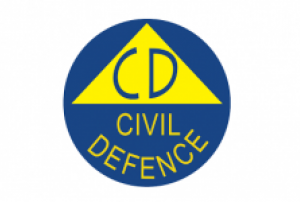 About Civil Defense and Emergency Management
The Ministry of Civil Defence and Emergency Management leads the way in making New Zealand and its communities resilient to hazards and disasters. The overarching strategy for achieving resilience to hazards and disasters is through a risk management approach to the four "Rs" of:
Reduction
Readiness
Response
Recovery.